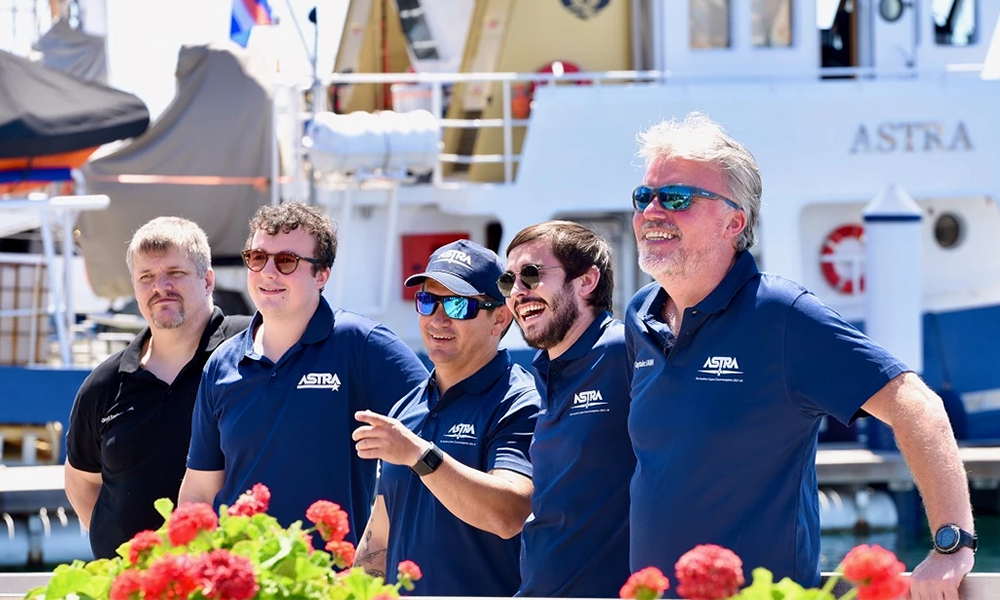 After 151 days at sea, Iain Macneil (CEO of Witherby Publishing Group) and his crew of four have set a new world record, having completed a world first circumnavigation, crossing the equator twice and travelling through 360 degrees of longitude of around 31,500 nautical miles.

Iain and the crew set off from Lanzarote on 1st December 2021 to complete a circumnavigation via the Southern Capes on board MV ASTRA, an historic vessel that served with the Swedish Sea Rescue Service between 1995 and 2016.

The vessel was selected for its full displacement and safety characteristics and creates a world first for a ‘round the world circumnavigation (via the Capes) on an owner/skippered full displacement motorboat of less than 24 metres’.

The usual established circumnavigation route for motor vessels is via the comparatively gentle waters of the Panama and Suez Canals. ASTRA undertook the more challenging route via the southern oceans, which is typically only taken by merchant ships or expeditions heading to the southern continent of Antarctica.

ASTRA was captained by Iain Macneil, an ex-Merchant Navy seafarer and CEO of Witherbys, along with his experienced crew – Chief Mate, Michael Napier; Second Mate, Daniel Rafferty; Junior Watch Officer, Carlos Casola; and Chief Engineers, Luke Crossley and Paul Griffiths. Iain is on the right with crew pictured above.

This unique and challenging expedition was chosen after ten years of ambition and two years of preparation and sea trials. It showcases what can be achieved by a vessel such as ASTRA, using the latest technology, equipment and skills.

On stepping ashore after completing the circumnavigation, Iain Macneil said: “Five and a half months, 31,500 miles, big seas, watches all around the clock, five people and a boat originally designed to break ice and go out on short rescue trips in the Baltic Sea … I’d call that a challenge and I am very glad to have gotten myself and my crew home safely to such a brilliant welcome.”

Further to the achievement, the Western Isles MP, Angus MacNeil, has prompted an Early Day Motion in the House of Commons in recognition of ASTRA’s record breaking circumnavigation.

Based in Edinburgh, Witherbys is one of Scotland’s largest and most successful publishing companies, exporting a portfolio of specialist titles in the shipping sector to more than 110 countries.

For more information and photographs of ASTRA and its crew, please visit https://www.mv-astra.com/.