Money Talks: Who Gets What in the Book Trade 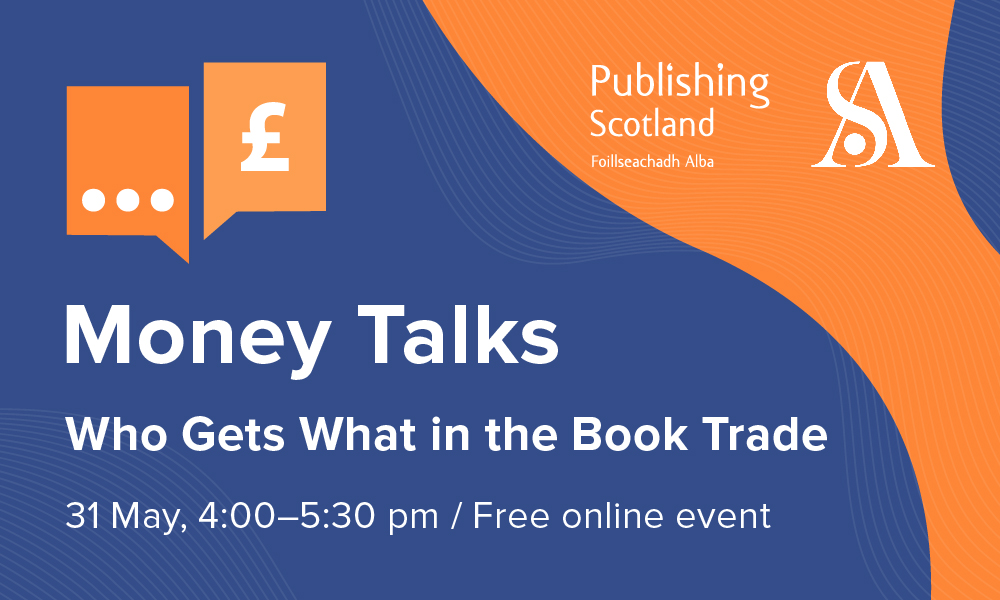 For the book trade to thrive, the economics of writing, publishing and selling books have to make sense. For new authors, or those entering the book trade, understanding the economics can be daunting: How does a publisher make a profit? What can an author expect to be paid? How does high street bookselling endure and succeed? Organised by Publishing Scotland in partnership with The Society of Authors, our Money Talks event brings together a panel of experienced book trade professionals to demystify where the money goes from the sale of a book and why.

The Money Talks event will outline the various costs of getting a book into the hands of readers and of sustaining book trade careers. In conversation with Heather Parry, Kate Gibb (Chief Operating Officer, Canongate Books), Nicola Solomon (Chief Executive, Society of Authors), Jenny Brown (Agent, Jenny Brown Associates), Marie Moser (Owner, The Edinburgh Bookshop), and Davinder Bedi (Managing Director, Booksource) will share their expertise on balancing the books and keeping the trade in good health. Tune in on 31 May and explore the real value of good reading.

BOOK your place on Ticket Tailor.

Kate Gibb is is the Chair of the Publishing Scotland Board and Chief Operating Officer at Canongate Books.

Nicola Solomon is the Chief Executive of the Society of Authors. A solicitor by trade, she is an expert in the publishing industry and the associated law, from copyright and defamation, to privacy, data protection and contracts. She is also a Deputy District Judge and sits on the board of the International Authors’ Forum and the British Copyright Council and the European Writers Council. She studied Law at the University of Warwick and is consistently featured in the Bookseller 100 list of the most influential names in the book trade.

Jenny Brown established Jenny Brown Associates literary agency in 2002. She was previously Head of Literature at the Scottish Arts Council, presenter of book programmes for Scottish Television, and Founder Director of the Edinburgh International Book Festival (of which she is now a Board member). She is also a former Committee member of the Association of Authors’ Agents and was shortlisted in 2014 and 2020 for the Agent of the Year Award. She is former Chair of the Bloody Scotland crime writing festival (2011–21). She was made an Honorary Fellow of the Royal Society of Literature in 2021.

Davinder Bedi is the Managing Director of BookSource, the trading arm of Publishing Scotland and a full service international book distributor with over 120 client publishers. He has been part of Scottish Publishing since 1996 and during his time has developed BookSource into what is now a vital service for publishers to be successful in today’s marketplace, especially small publishers. He has a particular interest in sustainability within the book business supply chain and is keen to make BookSource ‘Net Zero’ as soon as possible. Dav studied at Glasgow University and later went back to take an MBA. He sits as a Board Member or Trustee on other charity boards, including Publishing Scotland, and can often be found shouting at Partick Thistle on Saturday afternoons.

Heather Parry is a writer and reader based in Glasgow. Her work has been performed at the Edinburgh International Book Festival and published in books and magazines including The Stinging Fly and New Writing Scotland 35, and her debut novel, Orpheus Builds a Girl, will be released in October 2022 by Gallic Books. She is the Senior Policy and Liaison Manager (Scotland) for the Society of Authors and has worked within the publishing industry for over a decade as an editor, ghost writer, researcher and consultant.