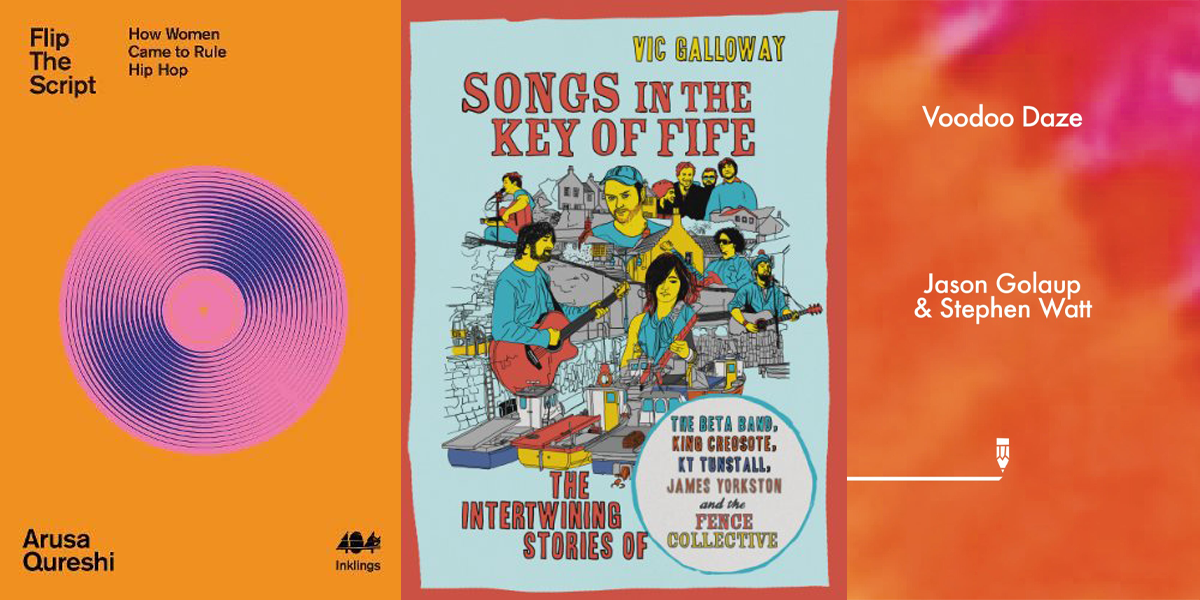 Dive into our list of ten brilliant music books, created in partnership for Edinburgh City of Literature, for the Year of Stories.

This pocket-sized treasure trove celebrates the capital city’s musical heritage, shining a light on on the key people, venues and gigs that have shaped the city’s music scene in folk, funk, rock, pop, punk and every other musical genre in between.

Songs in the Key of Fife: The Intertwining Stories of the Beta Band, King Creosote, KT Tunstall, James Yorkston and the Fence Collective by Vic Galloway
Published by Polygon

Head over the Queensferry Crossing, and along the A915, and you’ll find yourself in the East Neuk of Fife, home of the highly influential community of musicians that made up the Fence Collective. Vic Galloway, who also grew up there provides the fascinating story, full of personal anecdotes and insights, provides an in-depth look at a unique collective of musicians who have experienced the extreme highs and the desperate lows of the music business over 20 years.

This is Memorial Device by David Keenan
Published by Faber

We stay with small-town Scotland—Airdrie in particular—with this unforgettable novel that captures the dreams, and the glorious possibilities that art and music bring to its marvellous cast of drop outs, musicians, misfits and visionaries. How do you create a legend? David Keenan’s writing will tell you.

If you want to remember the hedonistic days of nineties dance clubs, then this collection of prose (Jason Golaup) and poetry (Stephen Watt) will take you there. These pieces brilliantly evoke the lights, the noise, the sweat, the movement, the community, and, of course, the music of these times.

Flip the Script: How Women Came to Rule Hip-Hop by Arusa Qureshi
Published by 404 Ink

Flip The Script showcases some of the best rappers currently making music in the UK, pays tribute to the phenomenal women in hip hop since its beginnings, and looks forward to its future and women’s place within the genre. A must read for fans of music, feminism, and culture.

Jackie Kay has written a biography like no other for a woman like no other. Bessie Smith was the first blues superstar, a pioneer and legend. Jackie Kay mixes biography, fiction, poetry and prose to create an enthralling account of an extraordinary life, and writes beautifully on what it means to be a fan.

In a novel that explores family and grief, it is Kelman’s writing on Murdo’s discovery of Mississippi’s zydeco music and how it transforms his accordian playing that emphasises the power of art, and how music can help expressing emotions that seem impossible to say in words. Beautiful and moving.

In this work of fiction, Kirsty Gunn has created something as real as music or as a dream. It tells the story of John Sutherland, who is dying and creating in the last days of his life a musical composition that will define it. The structure of the novel follows the compositional form for the classical bagpipe making it a work of undeniable originality and power.

This is a comprehensive anthology of Gaelic songs of Skye that Frances Tolmie collected from oral tradition in the early Twentieth century. This book keeps alive a tradition and essential part of Scotland’s culture. An important and valuable book.

We start at the beginning of our musical education and the nursery rhymes we’re taught on the knee. Floris celebrate these early songs with colourful lift-the-flap books, and have also published books of the Three Craws and Ye Cannae Shove Yer Granny off the Bus.