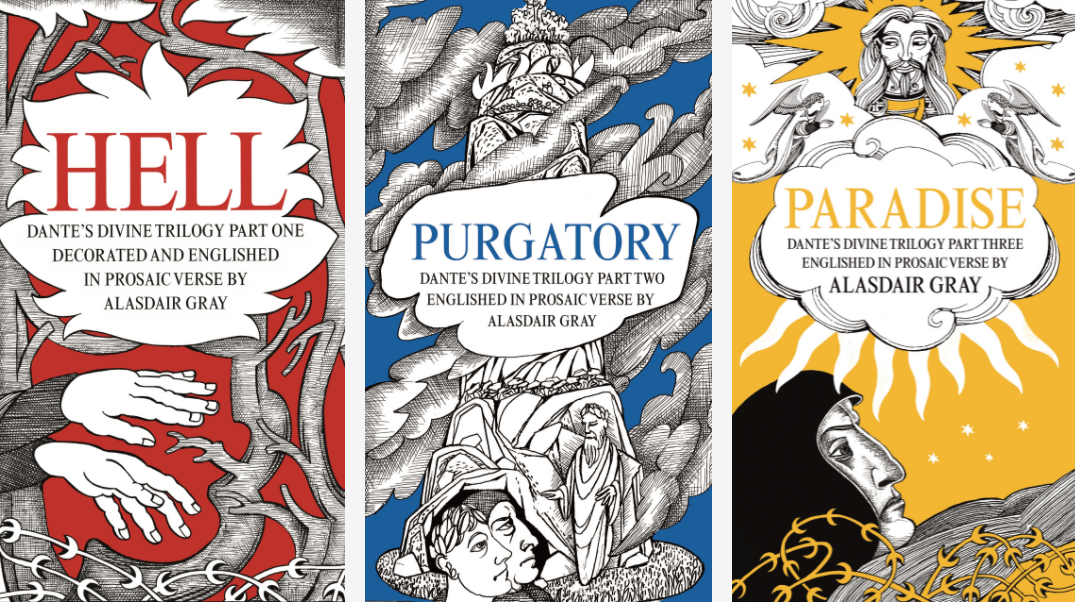 Alasdair Gray was a titan of Scottish literature. In honour of Gray Day, here’s a small selection to dive into to discover just why he became such a prolific and significant presence, or to revisit if the pages of your copies are well worn.

★ Denotes a book published by a Publishing Scotland member.

Start where it all began. Lanark is a modern vision of hell set in the disintegrating cities of Unthank and Glasgow, telling interwoven stories between the eponymous Lanark and Duncan Thaw. A vast book in scale, ambition and sheer talent, Lanark firmly established Gray as one of the country’s leading writers and was the springboard for a career that would come to shape Scottish literature.

“Probably the greatest novel of the century” said the Observer.

A definitive work in both its divisiveness and acclaim, 1982, Janine follows Jock McLeish, failed husband, lover and businessman is alone in a hotel room, drinking whisky, fantasising about sex and contemplating suicide. As he tries to distance himself from reality, his lonely, alcohol-fuelled fantasies are interrupted by a flood of memories, reminding him of his own shortcomings.

On the book, Gray said, “Though I think it my best novel I cannot now reread it. I’m back to being as old fashioned as I was before imagining it.”

A slight cheat in this brings together work from across Gray’s career and plucks from many of his titles under one neat umbrella, from 1983’s Unlikely Stories, Mostly right up to sixteen new ones written specifically for this collection a decade ago. If ever a book were to capture the breadth of work in one single career, this is a fine example to dive into the experimental, uncompromising talent of Alasdair Gray.

A life told through a collection of essays, this is a welcome dive into the mind of Gray beyond his fictional worlds – on how his experience, inspirations, beliefs and creations are all linked. Through the lens of his art, readers explore the personal to broader topics of people, place and politics and the interconnections between them all.

Englished in prosaic verse by Gray, his last work is a retelling of one of the greatest from world literature, Dante’s journey through hell. Available as three volumes – Hell, Purgatory and Paradise respectively – they’re also now available in one collected edition. Ambitious and creative until the end, this is a formidable trilogy bringing a fresh life to one of the greats, by another.