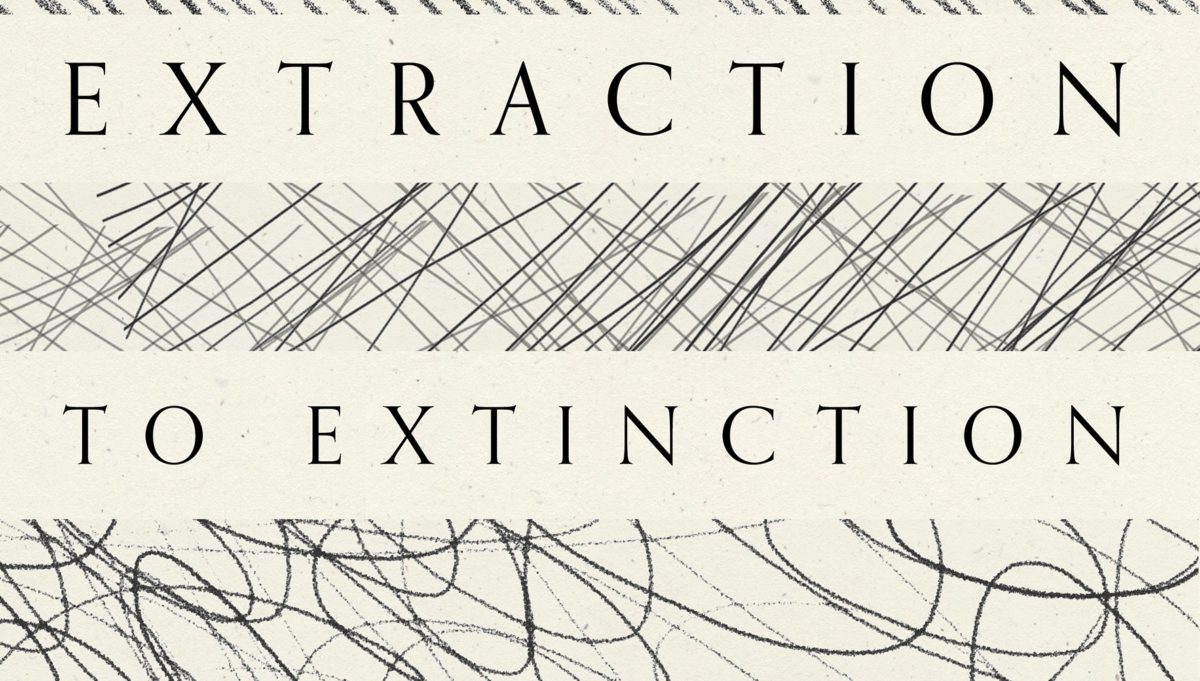 THE GREAT OUTDOORS | We talk to David Howe about his book Extraction to Extinction to learn more about our relationship with and reliance on the world around us, and how the future could look.

Can you tell readers a bit more about Extraction to Extinction?

It’s a book about how men and women over the last few thousand years, right up to the present day, have learned to turn the many types of rock that make up the planet’s crust into all the material stuff that fills our modern world. We’ve been a very clever species. Whether it’s a skyscraper or mighty bridge of steel, mobile phone or television, plastic bottle or aluminium foil, plate glass window or silicon chip, car or plane, nearly all the materials that go into the manufacture of these things began life as a rock. Geologists have a saying that if you can’t eat it, a geologist probably found it. And for hundreds of years we have also been digging, pumping and burning vast amounts of fossilised fuels – coal, oil and natural gas – to power the industries that transmute the rocks into all this amazing stuff. We now mine, quarry, pump, cut, blast, and crush Earth’s resources at an unprecedented rate. We have become a dominant force on the planet. In fact, we appear to be creating a new geological epoch – the Anthropocene – and this is probably not a good thing.

However, we are beginning to recognise that we are paying a heavy environmental price for all this ingenuity. Landscapes are degraded, oceans polluted, and greenhouse gases emitted. As a result, we see global temperatures rising, the climate changing, ecologies collapsing and biodiversity falling. We could be on our way to a sixth mass extinction. In essence the book is a cautionary tale in which human hubris is being chased by Nemesis, the goddess of retribution. Gaia is having her revenge.

What drew you to this topic? How early did this interest begin, and evolve?

The first time I entertained a very early version of these thoughts was at the end of a school geology field trip in the mid-1960s. We had been exploring the sandstone rocks of Alderley Edge in Cheshire which, since Bronze Age times, had been mined for their veins of malachite. Malachite is a copper mineral. I wondered how on earth Bronze Age men and women knew that you could heat a bright, brittle green mineral and release a soft, malleable metal of molten red copper. Genius, I thought. Never in a month of Sundays would it have crossed my mind that such an alchemical trick could be performed. And then fifty odd years later I happened to be driving by Alderley Edge and I remembered that long forgotten thought. I also realised that what was true of green-stained sandstone rocks and copper was also true of so many other material things and their manufacture. As I began to research the topic more deeply, I realised how much of this technological wizardry was coming at some cost to the planet.

“If we can marry our growing scientific understanding of the planet’s complex network of natural systems to our moral compass, sense of justice, political outrage, and instinct for survival, then there is still the hope.”

In tracking our environmental impact through time, are there any particularly key or defining eras or materials in terms of the scale or direction of the shifts?

Well, I think it has to be the mining and burning of coal to drive the steam engines that powered the factories and fuelled the blast furnaces and kilns, kick-starting the Industrial Revolution. Levels of the greenhouse gas (carbon dioxide) in the air suddenly began to increase, warming the atmosphere, causing global heating, leading to climate change and resulting in a threat to much of life on Earth. The pumping and burning of oil came along a century later to add to the problem.

You note how we are technologically clever, but all too often environmentally stupid. Can you expand on this idea a bit more? How can we address this?

As I’ve said, you have to be impressed at how our species has developed the skills and know-how to make so many marvellous and wondrous material things. It’s hard to imagine life without them. Just look around you and practically everything you see is rock somehow turned into stuff, into energy, into power, into speed, into communication. Quite extraordinary. But for centuries we’ve been rather complacent about the downsides of all this cunning. Although there have always been warning voices, including John Ruskin in the nineteenth century, they have largely been ignored.

There has been a belief that if we have been clever enough to make all this stuff then we can be smart enough to plan, plot and engineer our way out of any environmental worries. This is the cult of irrational optimism beloved by many politicians, fossil fuel lobbyists and economic neo-liberals who are loath to accept that we cannot go on consuming at present rates without dire consequences. The environmental journalist and activist George Monbiot writes that those possessed of this fantasy mindset, including much of the media, love these messages that really, nothing fundamental needs to change. We can wait for technological fixes and falls in the world’s population and everything will work out fine. ‘A simple story,’ mocks Monbiot, ‘with a happy ending telling power what it wants to hear, this is the Disney version of environmental science.’ But this relaxed attitude ignores so much of the robust scientific evidence warning that Earth systems are in imminent danger of reaching critical tipping points. This is especially true of global heating and climate change.

Naturally, climate change and protecting the earth is an important topic to many; for those looking to learn more on their own time of practical information and insights on what we can do, what would you recommend?

Of course, we can all make small changes to our own lives to help reduce pollution, the size of our carbon-footprints, and loss of biodiversity. The environmentalists’ mantra of ‘renounce, reduce, reuse and recycle’ is a good one. Eat less meat, use public transport, drive electric, walk more, cycle more, fly less, consume less, insulate more, recycle, and so on.

However, the more significant changes have to be made at the macro-political and economic level. As George Monbiot says, in order to prevent environmental breakdown we have to stop doing the old things we have always done. Massive commitment to green, renewable energy is absolutely essential, but it only makes sense if it fully replaces our reliance on burning fossil fuels. We can’t have it both ways. Only governments can bring about fundamental changes on this societal and global scale. Glasgow’s COP26 summit on the climate crisis went some way to get governments to agree to reduce their carbon emissions, but there is still the worry that it didn’t go far enough. Nevertheless, it is good to know that in hosting the conference Scotland in general and Glasgow in particular have played their part in warning the world and making a difference.

We can’t be politically neutral on such existential matters. From mocking Rachel Carson’s Silent Spring to snowflaking Greta Thunberg’s environmental activism, the powerful and those with vested interests have been relentless in their attempts to undermine, dismiss and ridicule popular mass political movements to bring about the deep economic and lifestyle changes that are absolutely necessary if we are to slow global heating, stop polluting the planet, and prevent a sixth mass extinction. When countries weaponise the export of their natural resources including coal, oil and gas, then the incentive to invest in home-based renewable energy sources becomes a no-brainer. Tina Stege played a key role at Glasgow’s Cop26. She has recently said ‘I hope that it is now clear that investing in renewable energy is an investment not just in energy but also in resilience and independence.’ Good advice, I’d say.

“We could be on our way to a sixth mass extinction. In essence the book is a cautionary tale in which human hubris is being chased by Nemesis, the goddess of retribution. Gaia is having her revenge.”

I’m seventy-six this year but I have children and grandchildren. It’s their future world I worry about. I’d like to think that the commitments made by governments around the world to reduce carbon emissions and clean-up their act will keep temperature increases to around 1.5o C. But I confess I’m not overly optimistic. Our track record on meeting agreed emission targets is not good. Recent measures taken this month, May 2022, at the Mauna Loa Observatory, Hawaii have recorded carbon dioxide levels in the atmosphere of over 420 ppm, some of the highest on record. Not looking good.

If we don’t do more, then the future looks bleak, even frightening. More and more of the planet becomes uninhabitable as temperatures rise above human endurance levels. Deserts spread north and south. Ice melts. Sea levels rise threatening coastal cities and millions of people. Population migrations pose major political challenges. Loss of biodiversity, especially loss of thousands of insect species, threatens food production. Land degradation and pollution get worse. Oh dear, all rather gloomy. So I would hope that books like mine, along with the many other voices shouting as loud as they can to take all this stuff very, very seriously, can act as a warning cry and a rallying call. When I see the generations below me acknowledging the reality of what’s happening and ‘getting it’ and getting active, maybe there is still hope. But we need to act fast.

I suppose I’m offering a double-edged message. We have to be impressed that as a species our scientific and practical skills have transformed the world and the lives we lead in ways that are quite extraordinary. But our scientific enquiries are also telling us that as a result of our ingenuity we are radically changing the balance of the planet’s natural systems in ways that are not only bad for us but bad for the rest of life on Earth too. If we can marry our growing scientific understanding of the planet’s complex network of natural systems to our moral compass, sense of justice, political outrage, and fundamental instinct for survival, then there is still the hope that we can avoid disaster.

Extraction to Extinction: Rethinking Our Relationship with Earth’s Natural Resources by David Howe is published by Saraband.