Interview: On tartan and tweed with Vixy Rae 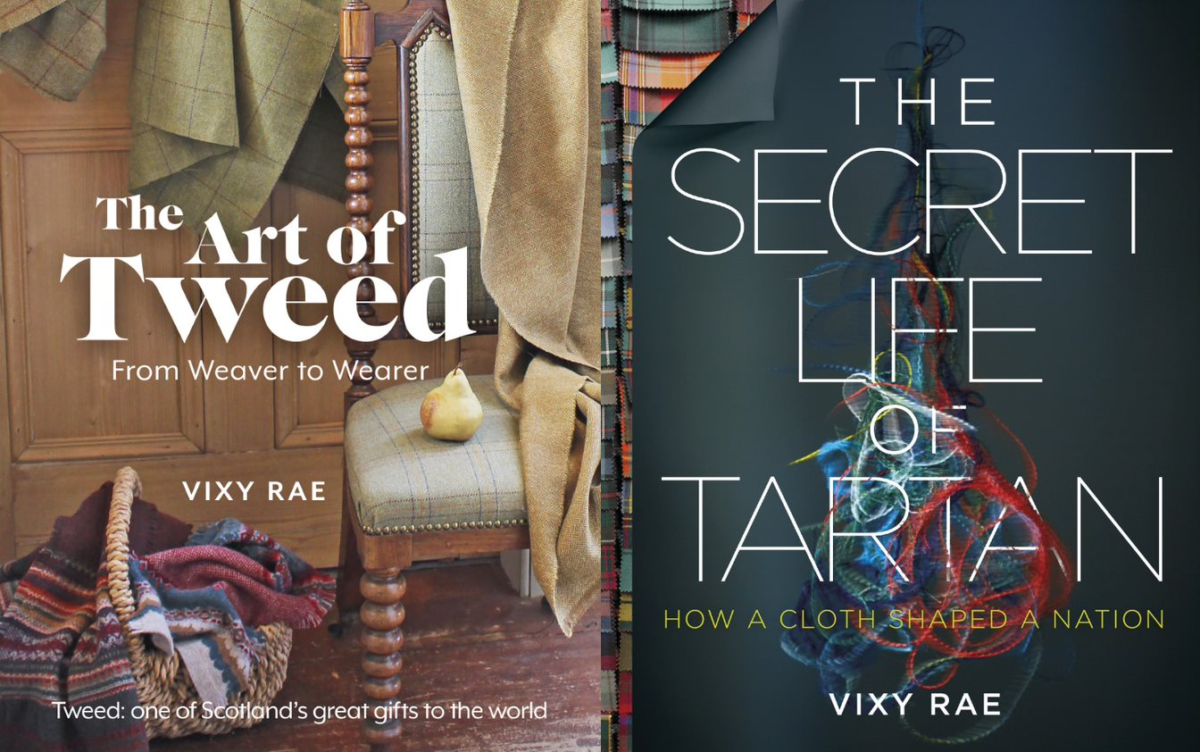 KNOWLEDGE | We interview Scottish designer Vixy Rae about all things tartan and tweed, her own relationship to fashion and fabric, and how textiles have come to represent a nation.

Can you give us an introduction to The Art of Tweed and The Secret Life of Tartan?

There are many books written about tartan (not so many on tweed) which offer an academic viewpoint relating to history and manufacture. I wanted to share an intensely personal journey through these cloths, reviewing aspects which combine popular culture and how the historic aspects have kept both these fabrics relevant and loved. Using these cloths on a daily basis, it was a chance to explore the heritage and meaning behind their colour, texture and beauty.

What draws you to fashion and design? Has it always been present in your life?

From an early age, I was greatly influenced by colour and texture. My schooling was ‘unconventional’ and yet this nurtured my creative side. At home, I would love to dress my Sacha dolls, designing and sewing new outfits for them. I suppose these two things led me to where I am today. I do very much enjoy being around people, meeting new characters and aiding them to translate aspects of their taste and personality into garments. Fabric is where a bespoke garment always starts and often the cloth ‘tells’ you what it wants to become, purely from its weight

“Fabric is where a bespoke garment always starts and often the cloth ‘tells’ you what it wants to become.”

In The Secret Life of Tartan, it is sub-titled: how a cloth shaped a nation. Without asking a full retelling of the book(!), could you condense just why tartan has come to represent Scotland? What are its roots? How did it evolve?

Much of Scottish History is reinforced by myth and romance, and tartan has been part of Scotland’s story for hundreds of years. Although Tartan has been around since the times of the Picts, it became most popular thanks to Sir Walter Scott and the Victorians.

Fuelled by the industrial revolution, cloth production and dying of yarn became an industry, giving much more consistency to the colour and quality of the fabric. For the royal visit to Edinburgh in 1832, it was a public relations stunt to unite Scotland and England. Sir Walter Scott was employed in the task of creating a grand pageant to welcome the British Monarch to Scotland’s Capital and this naturally involved ceremony and dress.

Later, Queen Victoria’s love of Scotland along with the popularity of train travel heralded a new age of ‘tourism’ for Scotland. The romance of the Scottish Clan’s combined with tales of noble ‘rugged’ highlanders has enticed the hearts and minds of visitors. Tartan gives them the chance to wear their Scottish-ness with pride and is still recognised the world over.

Similarly, tweed is referred to as one of Scotland’s great gifts to the world, and the book a story of romance, nostalgia, sustainability and style. What is it about tweed and its legacy that has made it so prominent?

For a nation which is renowned for its lochs and glens, it is hardly surprising that a fabric as uncompromising and rugged as the cairns and crags was birthed here. I like to think of tweed as an ‘honest’ cloth, with colours inspired by the landscape and its flora. It’s depth and texture created from its patterns and weaves, it is a fabric which has stood the test of time both practically and stylistically.

Whereas tartan has its proud and bold colours, heralding unity and ceremony, tweed is almost the inverse of this, with its stealthy tones blending into the countryside. Its longevity comes from a combination of durability and craft and has been a staple cloth in wardrobes through the generations. Creating not only seasonal reinvention through fashion, but sustainable legacy pieces to be handed down and cherished.

Although there are many modern fibres and fabrics which may be lighter or easier to care for, tweed graced the shoulders of both Artic explorers and catwalk models through the ages, proving it has a tireless and timeless elegance only matched by its versatility.

“I like to think of tweed as an ‘honest’ cloth, with colours inspired by the landscape and its flora.”

A big part of fashion and the wider world right now is a move towards sustainability – is this something you see in these respective textile industries, and more broadly?

There is the mantra echoing through modern trends of ‘keeping it local’, although we still live our lives and have come to rely on the convenience of mass production, the world is now feeling the effects and suffering created by mass consumption on many levels.

Fabric production, both man-made and natural fibres, has been responsible for considerable unseen global pollution for the past century. With cheap ‘sweatshop’ made fast fashion being a key malefactor in this ecological crime.

Choosing locally spun yarns and woven cloth reduces the carbon footprint. Using bespoke tailors means more care, craft and skill is nurtured into garments, creating clothing with a soul. Our lives are cluttered with things we don’t need and clothes we buy and don’t wear, more value needs to be recognised in items which have a longer lifespan and cause less pollution to the environment. The less distance from the sheep’s back to the customers, the better it is all round.

You’ve documented the life and history of both tartan and tweed here: what do you think the future holds for them?

As long as there is Scotland there will be Tartan, and as long as there are hills there will be tweed! Both cloths have had their fair share of press and catwalk coverage in the fashion world even over the past 50 years. Although there will be technological innovations and shifts in trend, the key elements which make up these two fabrics will keep them from ever disappearing from designer look-books or into the suitcase in the attic for too long. Tartan is now as popular globally is it was in Victorian times, and tweed is kept in the forefront of popular culture by its appearance in period dramas. As long as our love affair with the past endures then these cloths will have a relevant place in our hearts, and in our wardrobes.

“As long as our love affair with the past endures then these cloths will have a relevant place in our hearts, and in our wardrobes.”

What do you hope readers take from your books?

I would hope there are a few facts, and interesting references which will stay with the reader. The books are supposed to be ones to pick up and put down, with bite sized pieces of inspiration and knowledge tucked inside. I never like to preach, but I do have some strong opinions on certain aspects of style and correctness. Both books cover my personal portfolio and journey through tailoring. My love of nature’s camouflage in the world of cloth and clothing. Knowledge that I have wanted to share and record, looking back to then look forward, and realising that the past has as much to do with the future, as it ever did in the moment.

The Art of Tweed and The Secret Life of Tartan by Vixy Rae is published by Black & White Publishing.