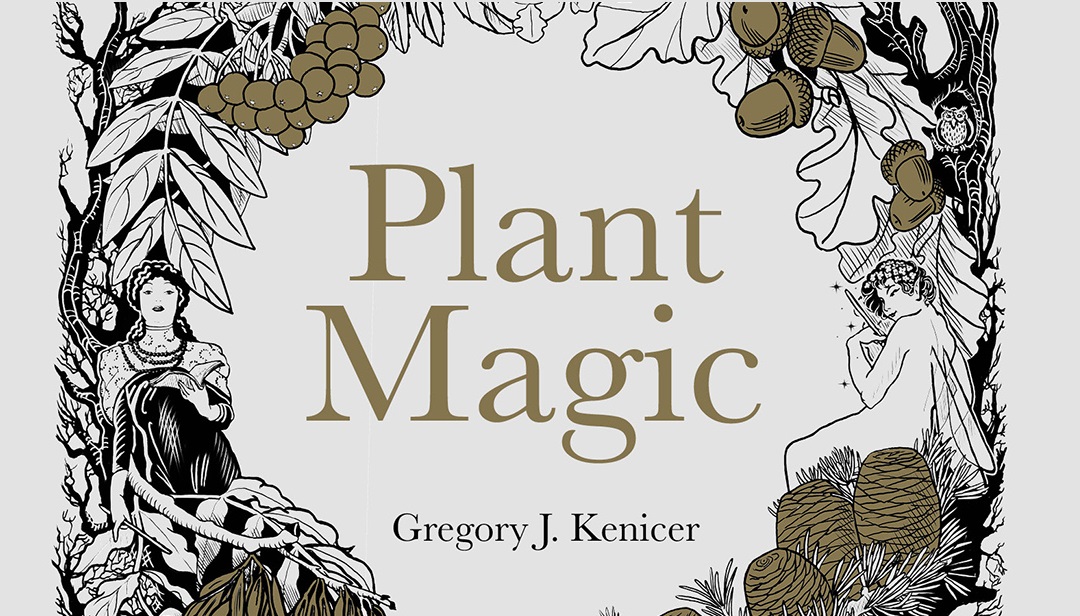 THE GREAT OUTDOORS | Plant Magic is a book that explores why various plants have been used in magic and what that tell us about people, plants and the world around us. We talk to Gregory Kenicer to learn more.

Can you tell readers a bit more about your book Plant Magic?

Plant Magic is a tour through the botanical Kingdom looking at the myriad ways in which people have tied plants in to magic and the otherworlds. From curses to charms, from local beliefs to much more widespread ideas, the focus is mostly on European and near-Eastern magical traditions.

“Plants are the fundamental basis for our existence.”

What draws you to plants as a subject? What is your own background within the area?

Plants are quite simply utterly fascinating –that’s one of the reasons I became a botanist. Another is that plants inspire people – any teachers I’ve met who studied botany always had an extra twinkle in their eye when talking about their beloved botanical topic that I didn’t see so often in other professions. I’ve gone on to teach at he Royal Botanic Garden Edinburgh myself and hope I can convey even a fraction of the Plant Kingdom’s wonders.

My research looks at he evolution of peas and their relatives, as well as traditional uses of plants in Scotland and further afield – Plant Magic was a natural extension of this (in part because I couldn’t quite imagine the public appeal of a book on the incredible, but humble pea – but watch this space).

Plant Magic touches on just one facet of why plants are so appealing. I love the inventive and imaginative ways people have used plants in magical traditions. Some of these traditions found mainstream and widespread acceptance – going on to become the foundations of modern medicine and chemistry.

There’s a resurgence, or a boom, of writing around magic and the connections with nature these last few years, why do you think that is?

Magic and the supernatural have always been one of the ways we try to explain the intriguing and complex world around us. Even in the present day, with scientific, evidence-based approaches looking to rationalise everything, most people can’t help looking at the intricacies of nature at work and see it as almost magical. With the rise of urbanisation and technology, people are maybe further than ever from a close connection with nature and it may be that folk are yearning to rediscover this, particularly in the shadow of the climate emergency and the Covid-19 pandemic. Interestingly, in the UK, people did have a chance to reconnect with nature through parts of lockdown and perhaps everyone out on their daily walks had a chance to see quite how quickly an untended, untamed nature resurges when we stop constantly mowing, weeding and trampling – that in itself was almost magical.

You touch on how plants bind all human life together, and it evolves and changes across cultures; can you summarise what this connection to the natural world and why it is so significant in its many forms?

Plants are the fundamental basis for our existence – from oxygen they make available, mopping up carbon to make the sugars and proteins they produce, they enable us to breathe and feed us. Beyond even these necessities for life, plants provide materials for clothing and building a huge array of medicines and even more stories, myths and beliefs.

Plants have been inextricably linked with human society, and as cultures have evolved and moved across the globe, the plants we have encountered and the ways we use them have changed and adapted – growing with humans.

“Plants inspire people – any teachers I’ve met who studied botany always had an extra twinkle in their eye when talking about their beloved botanical topic that I didn’t see so often in other professions.”

Do you have any particular favourite plants, in terms of what they’ve come to mean, their respective history, or how they are seen within magic’s traditions and history, and why?

There are, of course too many to list – and that sheer diversity of plants and their use in ancient magic systems is part of the appeal. If I was pressed, then maybe moonwort – the little frond of this tiny fern looks just like a key, so was believed to open locks or even cause horses to cast their shoes. Oh, and broad beans are interesting too – believed to be more human than plant according to Pythagoras, and the ash tree is great as well – particularly useful in everything from warding off snakes to curing all manner of diseases.

If someone was interested in starting out within the subject, what would be your advice?

Explore – there’s a host of interesting sources out there, with snippets of plant-lore hiding in all kinds of corners. We’re lucky that people began recording oral traditions about plant magic as early as the Epic of Gilgamesh, well over three thousand years ago. I’d recommend going to the original source material wherever you can – or at least translations. Of course, lots can be lost (or gained) in translation ,but again that’s part of the appeal – how these stories change.

A sense of the versatility of human ingenuity and imagination and, of course, the magic of plants.