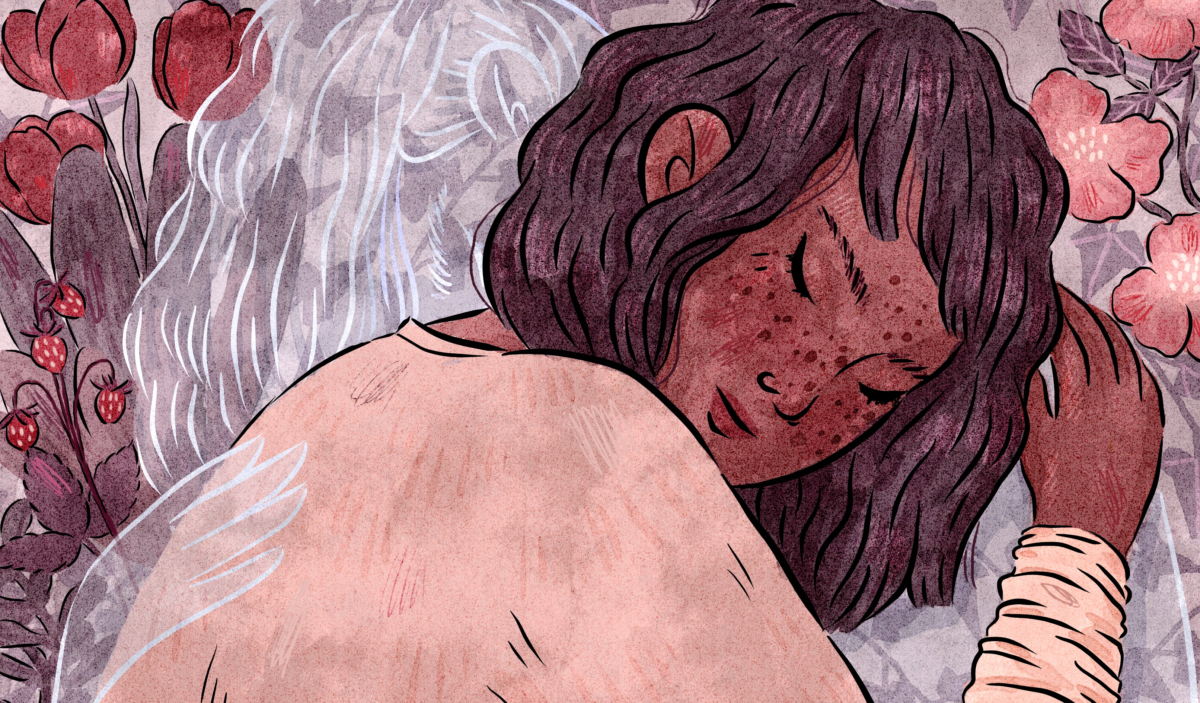 To celebrate LGBT History Month in the UK, we interview writer and illustrator Aven Wildsmith, whose reinvention of the classic folktale Tamlin combines both poetry and graphic novel forms to bring the story to life in new ways.

Can you give us an introduction to Tamlin, both in its original form and your own retelling?

The story is an extremely old one and dates back to at least the Tudor period, but is likely even older than that. It’s one of those incredible old Scottish ballads with dozens of different versions – it’s been variously called Tam Lin, Tam-a-Line, and Tamlane. In all its versions, it tells of a woman, either Janet or Margaret, who finds a mysterious knight in the woods, a man trapped in the realm of the fairies by the Fairy Queen. They fall in love, she usually falls pregnant, and he tells her that at Hallowe’en he will be sacrificed to the Devil by the fairies unless she helps him escape, which she does in an act of incredible bravery. My retelling is pretty true to the original in many ways, except that I decided to write Tamlin as a female character and to change some of the details of her captivity, so as to focus on her and Janet’s relationship. I’ve retold the story not only through a queer lens but also as a long poem and graphic novel.

“Folktales and fairytales are the heart of humanity; they show us at our most imaginative and complex, and are the outlet for all of our internal and communal joys and fears and strangeness.”

What is it about folk and fairy tales that draws you as a reader? Why Tamlin in particular for this project?

At the risk of sounding too grandiose, I think folktales and fairytales are the heart of humanity; they show us at our most imaginative and complex, and are the outlet for all of our internal and communal joys and fears and strangeness. I love the mystery of folktales, the way things don’t always need explaining, however surprising; and I love their subversiveness and unpredictability. A big draw, also, is their communal nature – they’re created by countless unknown hearts, intended to be shared with a community.

Tam Lin was, for a long time, my favourite folktale – it combined the mystery and terror of the supernatural with a fierce love story, something I’d never really encountered before. The story had a big impact on me and became a defining part of my poetic life and the way I approached writing. Janet, for me, is a truly great hero, and a standout female character in a genre in which women don’t often get to be heroic. So I felt it was a story that needed to be reacknowledged and re-energised for a new readership.

What did you want to bring to the story in retelling it?

I saw in the story something deeply relatable to queer people, this idea of being trapped, whether it be by shame or an abusive community or your own self-rejection; and the idea, also, of rescuing someone from that and transforming them through your love for them. There was a lot of potential I saw in the story that I wanted to draw out, a particular kind of poetic charge that I felt hadn’t been explored in the way I was looking for. I discarded some features of the original to focus more on the connection between the two characters and to highlight Janet’s choice in saving Tamlin. In the original, I felt as though she was under pressure to save Tamlin from the immediate danger of being sacrificed, so it was important to me to make sure that Janet’s choice to save Tamlin was completely her own and inspired purely by the love she felt for her.

Why did a mix of graphic novel and poetry feel the right fit for the story?

I’d been writing a lot of shorter poems before I wrote Tamlin and wanted to try a longer form, with the thought of Hughes’ Ovid retellings and Keats’ Endymion in my mind. I originally wrote it simply as a long poem but was never really sure how it could work as a published book. But after reading a few graphic novels and comics I figured it would make a good fit to present the poem in that way. The beauty of graphic novels is they give you the freedom, like picture books, to use each page as artistically as you like – if you need to have a page with just a single sentence on it, you’re free to do that, which can really let a moment sit and have the impact you need. And I love how the comic form allows for a more fluid and involved exploration of what characters are feeling and the way they’re interacting than traditional illustration. I felt that Tamlin really needed that fluid presentation.

How did you find the process creatively of reshaping the tale, both written and visually?

The poem itself was incredibly fun and rewarding to write, and one of those times when it feels like your brain has already been working on it without your knowledge. I deliberately avoided referring directly to the original ballads or other retellings, choosing instead to use my memory of the story as reference to allow myself to be more imaginatively free. I don’t see my version as a strict retelling but more of a reinvention, something directly from the heart. The history of oral storytelling was something that was very significant to me with this story, the awareness that it was a ballad to be shared with a community; I was creating quite an intimate book to be read alone, but nonetheless wanted to connect as much as I could to that tradition.

I found it was one of those stories that has the magical ability to become more mysterious the more you think about them, and the process of retelling it through a queer lens in particular uncovered a greater depth than I could really hope to explore.

Illustrating it was a very interesting and unusual process for me, and the first time working with a publishing team. It was really the first time I’d worked on such a heavily-illustrated project, and I learned a great deal through the process – so the art became as much an illustration of the story as an illustration of my own journey as an artist. For this book, it was important to me to make sure I was connecting to the poem’s sense of mystery and intimacy through the art.

“The process of retelling [Tamlin] through a queer lens in particular uncovered a greater depth than I could really hope to explore.”

What, and who, inspires your work?

I’m endlessly inspired by nature, the mystery of it and the way we’ve viewed it imaginatively throughout history, through folktales and folklore. I think this is why I’m drawn to certain writers like Ted Hughes and Alice Oswald, who have really plumbed the depths of that relationship we have with nature, in the most human way. And I’m also hugely inspired by writers like William Shakespeare, Carol Ann Duffy, and Charles Causley, for the way they understand human hearts and the role stories play in our lives. Visually, I look to John Anster Fitzgerald, Natalie Andrewson, Arthur Rackham, Emily Carroll, and Jackie Morris, to name just a few, for the beauty and the imaginative charge of their work.

What do you hope readers take from Tamlin?

I’d love for readers to feel that a very old story can still be relatable and can tell us things about ourselves today. And I hope people are reminded of the huge power there is in loving someone. For me, the story is something of a cathartic tale, the process of reading it in some way helping to move myself through whatever might be making me feel trapped into a place of freedom, as Tamlin is transformed and rescued by Janet, and as Janet, perhaps, is rescued by Tamlin – so I hope readers can take the transformative power of the story away with them into their lives. I’d also love the book to provide a reminder, if needed, that fairies (perhaps especially Scottish fairies) still have the power to intrigue and frighten us.

Tamlin by Aven Wildsmith is published by Knight Errant Press.