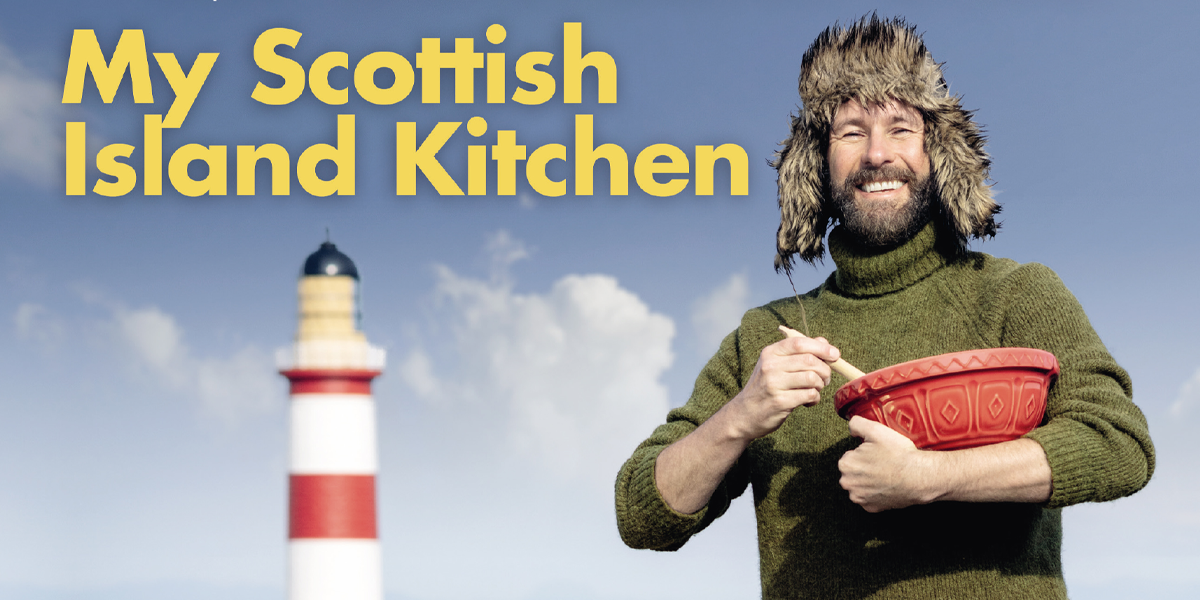 REFRESH | In the spirit of the theme – taking a break, having some quiet – we talk to The Hebridean Baker about his books and bakes, discussing the wonders of food.

Can you tell readers a bit more about your cookbooks as The Hebridean Baker?

My cookbooks are inspired by family recipes, traditional bakes and Scottish flavours, I love showcasing Scotland’s extensive larder and presenting wholesome treats with a story to tell. The cookbooks are filled with dishes for all seasons from Granny Annag’s Christmas Cake to Hot Toddy Bundt Cake, Posh Mince & Tatties to a Caledonian Cream, First Footers Martini to Empire Biscuits. Treats to make every Scot and lover of Scotland flock to their kitchens!

My debut cookbook The Hebridean Baker, Recipes and Wee Stories from the Scottish Islands became Scotland’s bestselling cookbook of 2021, it has now been released in the US, Canada and Australia.

There’s something here to put a smile on everyone’s face and along with the recipes there are heart-warming stories and breathtaking photography from the Outer Hebrides.

When did your passion for food and baking start? Was it present from childhood, or something that grew over the years?

I learned to bake from my mum and aunts growing up. In 2020, I began sharing videos online, they were mostly traditional recipes along with adventures throughout the islands with my partner Peter and our wee pup Seòras. Over 20 million video views (and counting!) later, I have inspired my followers to bake, forage, learn Gaelic, have a dram or two of whisky and dream of visiting the Scottish islands.

“For all of you who travel to the islands, you will go home with a memory you will never forget.”

What is it about the Hebrides that makes it so special, both in general but also with focus on food?

I was born and raised on the island of Lewis, the most northerly of the Outer Hebrides. When the late First Minister of Scotland, Donald Dewar, first visited Lewis, he met an elderly woman working on her croft in Uig on the west coast of the island. He asked her if she felt remote, she lifted her head and said to him: ‘Remote from where?’ Yes, we might be far away, but we do not feel remote – we are part of a community – and maybe I am biased, but for me, here is the most beautiful place on earth. Yes, we are part of Scotland but we have our own unique culture, language, traditions and legends.

For all of you who travel to the islands, you will go home with a memory you will never forget. Be it standing in the centre of a 5,000-year-old stone circle, maybe hearing the Gaelic language spoken for the first time, unrolling that perfect yard of Harris Tweed, being spun around by a burly man in a kilt at a ceilidh dance or walking through one of our beautiful villages.

Our cuisine is being celebrated more than ever before, with great producers of shellfish, lamb, black pudding amongst many dishes. You’ll find seafood tucks, fine dining restaurants and wee cafés that will entice you with their delicious cakes!

You’re just releasing your second cookbook; what can we expect in My Scottish Island Kitchen?

My Scottish Island Kitchen shares 75 new recipes from cakes to scones, stews to soups and cocktails to puddings, this along with island stories and beautiful photography from the Hebrides. I continue to champion Scottish recipes and flavours, but added to that, I look north for a chapter on Nordic bakes along with a Hebridean Afternoon Tea and a Christmas selection that will make you feel very festive!

“I hope the book inspires [readers] to try some of my recipes, come and visit the Outer Hebrides and enjoy a bit of the Hebridean Hygge lifestyle.”

Meals stand out to us for more than the food – often the stories, relationships and memories connected to them. What are some key food stories from your own life, or dishes that stand out as being connected to specific moments or people for you?

Clootie Dumpling or ‘Duff’ as we say in Gaelic, is my favourite traditional recipe. And no one makes it better than my Aunt Bellag. When I persuaded her to give me her recipe, she told me she had been making it the same way for the past 80 years! And still bakes it every week for her husband Murdo who is 95. It was even my brother Dòmhnall’s wedding cake when he married his wife Zoe. My aunt adds an extra ingredient, a tablespoon of marmalade – which I love. Its distinctive skin sets it apart from other fruit cakes. It can be sliced like a cake, served warm with custard, or the next morning fried in bacon fat as part of a Hebridean breakfast!

As we enter the autumn months, what would be a go-to recipe from your books you’d recommend for the season?

If I was to serve you up a meal, I would start with my Autumnal Veg & Barley Soup, served with Oat & Carrot Rolls, then Cock-a-Leekie Pie before tucking into an indulgent slice of Treacle Toffee Banoffee!

I hope the book inspires them to do three things: try some of my recipes, come and visit the Outer Hebrides and enjoy a bit of the Hebridean Hygge lifestyle by slowing down and treating yourself to a slice of cake by the fireside.

The Hebridean Baker: My Scottish Island Kitchen by Coinneach MacLeod is published by Black & White Publishing.