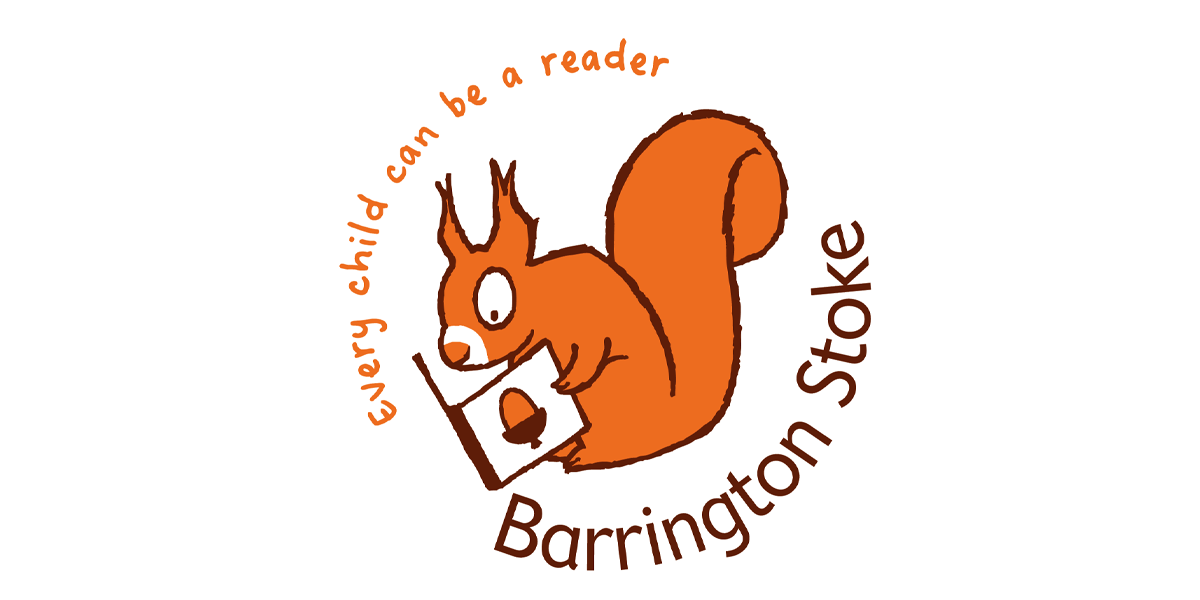 Across 2022, the Year of Stories, we are spotlighting Publishing Scotland members, who will share their own story in their own words. Get to know Barrington Stoke, the children’s publisher pioneering super-readable, dyslexia friendly fiction to help every child become a reader.

Barrington Stoke was founded 25 years ago with the aim of bringing books from the cream of talent in children’s publishing to the readers who need them the most. Patience Thomson, a dyslexia specialist, and Lucy Juckes, former sales director at Bloomsbury Publishing, spotted that there was a gap in the market for “real books” for children who struggle to read, whether due to dyslexia or other processing issues, and for those who are reluctant to engage.

Using help and advice from a raft of experts, they looked at all aspects of design in order to reduce barriers to reading. This led to the evolution of the bespoke Barrington Stoke font as well as the use of more spacious page layouts and illustrations to aid comprehension and break up the text. The books are also printed on cream paper to reduce glare.

Struggling and reluctant readers remain at the core of our publishing but due to the quality of the writers and illustrators we work with, our books are also now acknowledged as being fantastic stories for all young people. This was recognised when Lark by Anthony McGowan won the Carnegie Medal, the most prestigious award in children’s publishing.

We have been hugely ambitious for our readers from the outset, and two of the first authors on the Barrington Stoke list were Malorie Blackman and Michael Morpurgo, Children’s Laureates whose titles remain relevant and strong sellers on our backlist 25 years later. Another five Children’s Laureates also feature on the list – a mark of the quality of our publishing and also of the understanding of our mission by some of the titans of the industry.

One of our most important authors is Tom Palmer, whose books have won countless awards, including the FCBG Children’s Book Award twice. His 2020 book After the War, the story of 300 children who survived the Holocaust and were brought to Windermere to start rebuilding their lives, has been described by the CEO of the Anne Frank Trust as “the best children’s book I’ve yet read about the Holocaust” and is endorsed by the Centre for Holocaust Education.

We try to ensure that there is something on the list for everyone – from Dan Smith’s gripping sci-fi horror to gentle animal stories from Holly Webb; empathetic glimpses into children’s everyday struggles from Lisa Thompson, to fantastical worlds of invention from Vashti Hardy; hilarity from Phil Earle and Ross Montgomery to gripping narrative non-fiction from Catherine Johnson and David Long.

·What draws you to a story? What makes a good story?

With Barrington Stoke the power of the story is at the heart of everything that we do. Our books are much shorter so that they are an achievable challenge, but it takes great skill to write a powerful short novel and to ensure that it delivers in terms of plot, world building and themes that are great for discussion. Our books need to grip and entertain readers from the very first page and have a lot of work to do in a very contained word count.

To achieve this standard we have to work with talented and experienced authors who are masters of their craft, and this is also crucial to ensuring that our readers are able to access work from the same writers that their peers are reading. So, for example, when one of their friends is reading a book from the Pages & Co. series by Anna James, they can be reading Hetty and the Battle of the Books from our list with no sense of stigma.

We publish around 40 titles a year, from first chapter books to books for teens, and they are ALL fantastic, so it’s very hard to single any out. As I’ve mentioned above, Anthony McGowan’s Lark winning the Carnegie Medal was a seminal moment for Barrington Stoke, and one of our key titles this summer is the exquisite Birdsong by Katya Balen, who won this year’s award with October, October (Bloomsbury). Tom Palmer is back with another Second World War epic, Resist, which tells the story of the resistance to the Nazi occupation of the Netherlands through the eyes of a teenage girl who gets involved after the murder of her uncle and the enslavement of her brother. Amazingly, it is based on the real experiences of the iconic film star Audrey Hepburn.

Serena Patel has delivered a fantastic new addition to the list in the form of Picture Perfect, which gives a hilarious glimpse into the life of a British Indian family forced to undergo a digital detox, while Patrice Lawrence’s Needle gives an uncompromising view of the experiences of a teenager caught up in both the care and criminal justice systems.

Still to come in September is an important new title from Catherine Johnson, who retells the story of a Black figure often overlooked in history, Olaudah Equiano, slave, author and abolitionist.