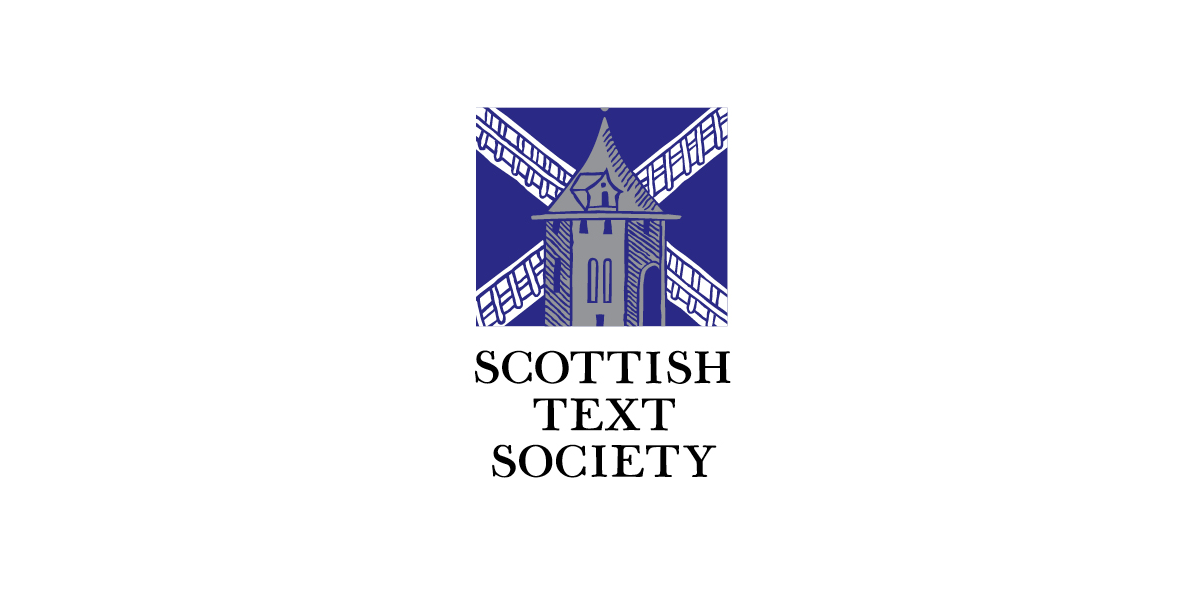 Across 2022, the Year of Stories, we are spotlighting Publishing Scotland members, who will share their own story in their own words. Get to know the Scottish Text Society, who publishes important texts from Scotland’s literary history. Formed in 1882, it is one of the oldest literary organisations in our membership.

The Scottish Text Society was founded in 1882, to publish scholarly editions of literary material in Older Scots and to make them better known and more accessible. Its foundation warranted a notice in the Scotsman, and we like to think our work is still newsworthy, even though most of our publications were written before 1700. Since our foundation, we have expanded our range slightly to include Scottish work in English, notably the poems of William Drummond (1585-1649)  and in Latin, such some of the work of Drummond’s contemporary Robert Aytoun (1570-1638). We’re a learned society, so our finances are based on memberships, although our books are also available through our publisher, Boydell and Brewer. Anyone is welcome to join: please see our website, www.scottishtextsociety.org for details.

We have published all kinds of material, from epic poetry, to beast fable and dream allegory, to love poetry, to history writing, and not all of those kinds of writing are familiar today – or indeed seen as literary productions. In the past decade, one of our highlights has been The Buke of the Howlat, written by Richard Holland and edited by Ralph Hanna.. This is a beast fable, a story of an ugly owl who gets above himself, and the poem connects the story ambiguously to its fifteenth-century Scottish politics. It’s a terrific poem with a lot still to say: following our publication, the story was turned into a children’s book by James Robertson and Kate Leiper, published by Birlinn, and it was dramatized by the Findhorn Festival at Brodie Castle. It’s really exciting for us when our texts come alive again! We have also published Jeremy Smith’s Older Scots: A Linguistic Reader, a fantastic primer for anyone wanting to get a grip on Older Scots: that has a bit of a story, but the story of a language rather than any individual.

We have quite particular criteria in what we publish: with a few exceptions (such as editions of Allan Ramsay and Robert Fergusson before they became better known, or collections of ballads), we focus on pre-1700 material, mostly in Older Scots and in English. (We don’t publish Gaelic material – the Scottish Gaelic Text Society publishes that). Each text needs an editor, someone with scholarly expertise in editing and in and around the text they’d like to see published. The Council of the Society does have a wish-list, particularly more seventeenth-century material, such as Anna Hume and William Lithgow: we’re looking for those who’d like to edit to come forward!

This year we saw the completion of a major item on our wishlist: a new edition of Gavin Douglas’s Eneados, edited by Priscilla Bawcutt with Ian C. Cunningham. This has been a huge endeavour, and it is a great sadness that Priscilla died before the whole edition was published, but it is a brilliant edition of a really exciting and important text. Douglas’s translation of the whole of Virgil’s Aeneid (1513) was the first in any variety of Scots or English, and one of the first into modern European vernaculars. New work is beginning to unpick Douglas’s translation techniques, and the edition provides all the guidance a reader could need to start with this Older Scots text. For those wanting more information on editing and its challenges, a collection of Priscilla’s essays, Textual and Bibliographical Studies in Older Scots Literature, edited by Janet Hadley Williams, has just been published under the aegis of the Society.

We are also working with Boydell and Brewer to reproduce our editions of the Bruce by John Barbour and Hary’s Wallace, also hugely important texts. These have been out of print for some years, so we’re really excited to be able to make them available again. We’ll announce on our social media and our website when they’re available.

Learn more about the Scottish Text Society at @scottextsoc and scottishtextsociety.org.