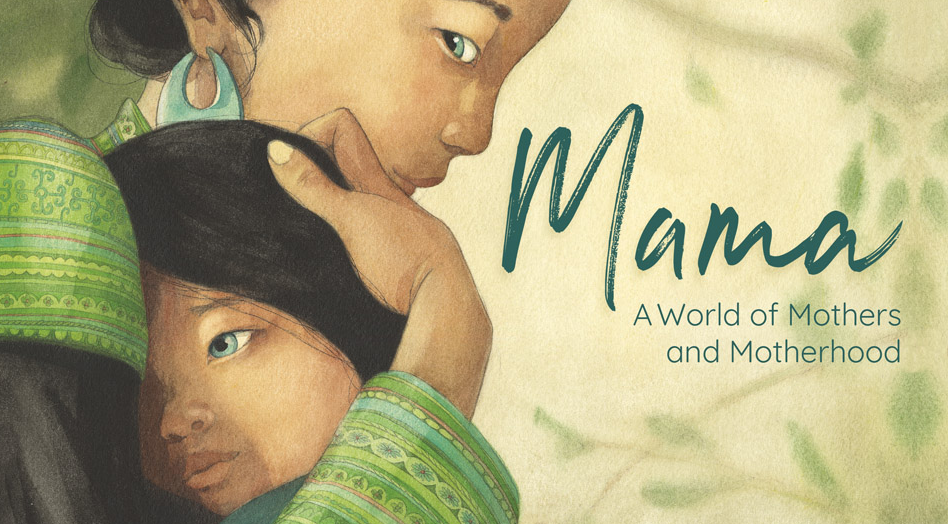 INSPIRING TALES / RESPONSES | As part of the Year of Scotland’s Stories, we are running a series of Responses on BooksfromScotland, commissioning writers to respond to books from the Publishing Scotland membership, engaging with work in different ways. For April, Chitra Ramaswamy – author of Expecting: The Inner Life of Pregnancy (2016) and Homelands: The History of a Friendship (2022) – considers Hélène Delforge’s Mama: A World of Mothers and Motherhood, and the landscape of parenting today.

I should probably begin with a disclaimer. I don’t read books about motherhood. This is partly a personality issue – the logical outcome of being a person who refuses to be told what to do. Who, rather than follow someone else’s directions, would prefer to get lost. Perhaps even find my own way. It’s also, however, because most books about motherhood, mothering, parenting, whatever one wishes to call it, are prescriptive rather than descriptive. They seek to tell us what to do and worse still, what not to do. How to breastfeed, and when to stop. When to move the baby’s cot out of the bedroom and how to sleep-train. To baby-led-wean, or to not baby-led-wean? And on it goes, ad infinitum, while the baby fattens and lengthens and does what the baby does, and the mother feels unseen, unknown, unloved, unwashed, and understood by no-one. The truth is, this unparalleled adventure called motherhood can never be reduced to a set of operating instructions. We’re talking about human beings for god’s sake and there is no more a manual for rearing them than there is one for loving them, or grieving their death. Motherhood is so much better, deeper, harder and more interesting (and boring!) than any attempt to represent it. So no, I don’t want to be taught how to be a mother. I want to be told what it means, and how it feels.

This is why, when it came to writing a book about pregnancy (and I don’t read those either) I wanted to illuminate its inner life. Both the foetus’s, I mean, and mine. And it’s why my favourite books about motherhood tend to be memoirs of the frank, radical, meditative type. The kind that seem to make society very angry. Like Rachel Cusk’s A Life’s Work, the particularly vicious reaction to which perfectly illustrates our distaste for mothers who dare to describe their experience, in the round, of bringing up baby. The novel that speaks to me most about motherhood is Toni Morrison’s Beloved, which generates the tenacity and ferocity of maternal love more beautifully than any other book I can think of. Picture books are particularly good at this, though being ostensibly for the very young. Like Judith Kerr’s The Tiger Who Came to Tea, which so acutely and gently chronicles the sweetness, loneliness, and extreme boredom of motherhood’s early years. When the days must be filled, the child must be entertained, and one prays for something, anything, yes a tiger!, to show up at the door and break up the endless hours at home on a rainy day.

Mama – A World of Mothers and Motherhood, written by Hélène Delforge and illustrated by Quentin Gréban, is a picture book too. It was borne out of Gréban’s desire to create ‘a series of portraits of mothers from different cultures and eras’ and has since been published in 27 languages. Apparently it all began when Gréban showed some of his drawings to his neighbour and sister-in-law Delforge, who happens to be a journalist and writer. She was so inspired by his beautiful illustrations of mothers from all over the world that she began writing immediately. So though both these contributors live on the same street in Brussels, this is very much a book about motherhood with a global outlook. How unusual. And welcome.

I wouldn’t go so far as to say all the world is here, but there’s a hell of a lot more of it than we usually see in the Eurocentric west. And Greban’s illustrations are exquisite. A mother whispers to her sleeping baby of adventures ahead, while another hunches over in pain, holding a white rose, grieving the death of her baby. In fact, this is the first book about motherhood I’ve seen directly addressing the death of a baby. Mothers, after all, remain mothers, no matter what horrors they endure. Delforge’s words are simple, sweet, sentimental, and affecting. A woman wonders if her baby tied to her back will live, like her, outside on the plains or move to the city. There are women who seek to protect their babies from ‘the hardships of the world’, those who want more for their daughters than their mothers were able to want for them, and those watching their slumbering toddlers in the rear-view mirror of their car, ‘always looking out for you’, ‘Mama, with eyes in the back of her head’.

There are brown-skinned mothers. Yes, Indian mothers. Mothers who look like me. I never saw a single mother like my own in a book when I was growing up, despite having one in the actual kitchen, rolling chapatis, feeding me rice mixed with thuppa (ghee) by hand, and years later, recording Neighbours off the telly so my sister and could watch it as soon as we got home from school. I still don’t really know what it must be to see yourself in the things around you from an early age. What quiet affirmation and unconscious self-love it must bring. Sometimes I watch my four-year-old daughter watching CBeebies, with its presenters and children of many races, backgrounds, abilities and disabilities, and feel something deep, old, and potent silently course through me. It’s relief, gladness, and tenderness for all that she sees and knows. Sadness for the little brown girl in me, for whom it is too late.

There are holes in Mama. Opportunities missed. Mothers unseen. Of course there are. We are far from there yet. My son is autistic and so I know intimately how much we, the mothers of children with disabilities and additional needs who work so bloody hard for them, yearn to see them represented in the culture. And not just represented. Celebrated. In Mama there are no mothers speaking of their wonderful disabled children. I kept turning the pages in hope, but it was not to be. Similarly, there are no queer or trans mothers. My children have two female parents: a mother (me), and a ‘babuga’ (my partner Claire). We often change the name of dads and fathers to ‘babuga’ in our picture books, so our children, until they start reading, might feel a bit more seen. How wonderful it would be to, even just once, not have to do this. So Mama, then is a mixed bag: tender, beautiful, sweet, imperfect, partial, sometimes disappointing, over-sentimental, and infuriating. Just like motherhood.

By Chitra Ramaswamy, author and journalist.