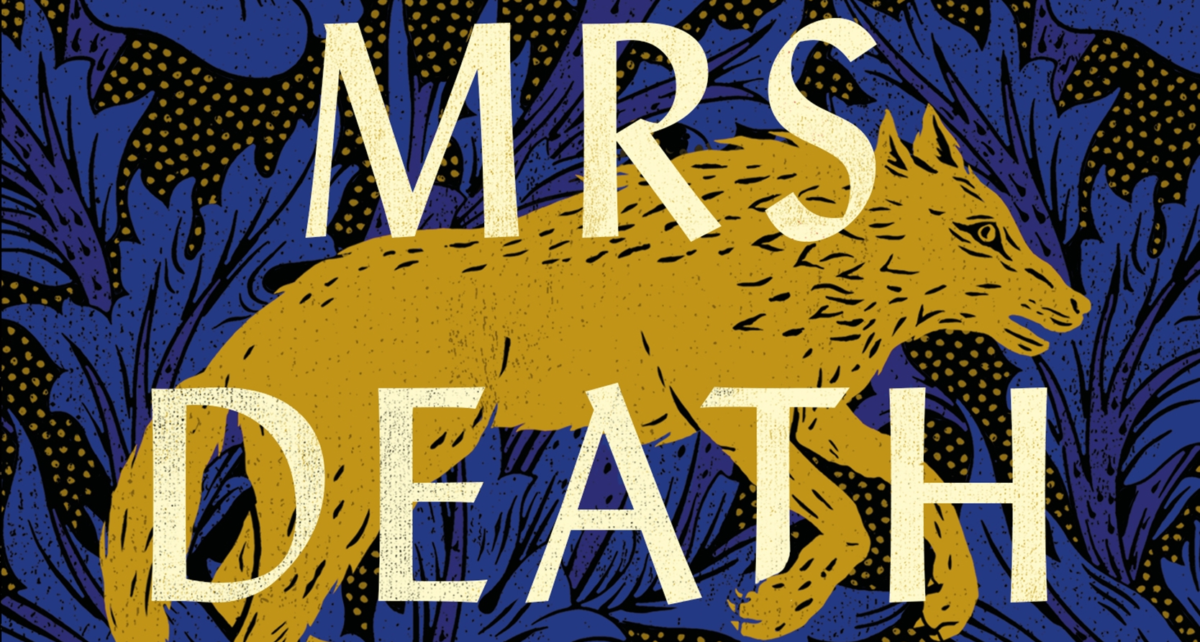 AFRESH / RESPONSES | As part of the Year of Stories, we will be running a series of Responses, commissioning writers to respond to books from the Publishing Scotland membership, engaging with work in different ways. For January 2022, Jess Brough, founder of Fringe of Colour, writes about Salena Godden’s debut novel Mrs Death Misses Death, published by Canongate.

Mrs Death Misses Death is, to me, the most original novel title of recent years. Even before opening the book to the first page, this word play led me to think of near-death experiences and intrusive thoughts, as if death sits on your shoulder and whispers “try me”.

In Salena Godden’s debut novel, Death can not only whisper, but can follow, accompany, guide and archive human life. Here, Death is “she”, and she is a “homeless black beggar-woman with knotty natty hair, broken back, walking ever so slow, slow, slow”. She shapeshifts throughout the novel, but Black womanhood remains in her various forms.

I wondered why she had to be a Black woman. We are given the explanation that “there is no human more invisible, more readily talked over, ignored, betrayed and easy to walk past” and, indeed, many scholars of Black feminism, such as Gail Lewis and Jade Bentil, have pointed out a forced duality of Black womanhood – that is to be, on one hand, invisibilized. On the other, hypervisibility intrudes on Black womanhood, for instance through objectification, fetishization, dehumanisation and stereotyping. Death can be so like this – teetering on the cusp of forgettability, ignored with enough practice till it is staring you in the face, while simultaneously remaining in our thoughts and daily lives at all times. As Godden puts it, Death is “the words trapped on the bitten tongue”. The pairing of Death with Black womanhood may be, therefore, an acknowledgment of that duality.

Admittedly, I struggled with the framing of Mrs Death as female. Godden makes the point that Death is so often depicted as male – the tall, hooded frame of the scythe carrying Grim Reaper, Hades, various (but not all) media depictions of The Angel of Death, and so on. This is her rebuttal. I am always trying to see gender as irrelevant as possible and so, in my mind, Death does not need to be framed as female to contradict gendered expectations, because Death does not need gender to be personified.

However, ours is a society in which Black trans and cis women, particularly those from working class backgrounds or living in poverty, are so often forgotten in historical retellings of both life and achievement and loss and tragedy. This may be via police brutality (resulting in the “Say Her Name” movement), contributions to knowledge and scientific discovery (intentionally, as scientists and researchers, or forcibly such as the enslaved victims of the torturous “father of gynaecology” Dr J. Marion Sims, or the cells stolen from Henrietta Lacks) and as agents who have been erased from their importance to their community. Perhaps, then, it is a rejection of all of this to place a Black woman who is homeless front and centre at the heart of all life. What a grave undertaking for Mrs Death, to carry the whole world on her back.

Gender non-conformity comes through a different character – working class Londoner and writer Wolf Willeford, who is described with gender fluidity. This is something we understand was a struggle in their childhood, but fortunately does not appear to be weighing heavy on Wolf’s mind in adulthood (the clarity of their self is refreshing). It is Wolf’s role to transcribe and document Mrs Death’s experiences, which Godden gives to us in essay, discursive and poetic forms. It is up to the reader to discern the true relationship between the pair; how Wolf’s identity may be a part of Mrs Death and how gender is therefore implicated. There are hints in the shadows between dialogue that suggest they are of one mind, but we may also consider Wolf as a sort of Medium, with the ability to not only witness Death in human form but to communicate with her. This relationship, along with Godden’s critical analysis of human behaviour and even the publishing industry at one point, is what makes Mrs Death Misses Death playful, placing the novel between the fantastical realism of Wolf’s conversations with Mrs Death and the non-fictional accounts of real-life deaths, which include mentions of famous murders and dead artists.

Like so many writers, Wolf is a reflectionist. Throughout the novel, they detail their experience of losing their mother as a child in an apartment block fire reminiscent of the 2017 Grenfell tragedy – the refusal for these lost lives to be forgotten, ensuring they are memorialised through storytelling is something I appreciate from writers like Godden – and the impact this loss had on their later life. Wolf talks about how, since that day, “I was never really alone: I felt her beside me, like a sudden urge to step out in front of a speeding train, to die was a temptation, a desire, a compulsion”. It is a feeling that parallels those initial thoughts I had, of death on your shoulder, imagining dying beyond the abstract and visualising an action with the curiosity. We, the readers, are urged in turn to consider the beckoning towards death of survivors and of those who have lost loved ones to Death’s unflinching pull.

What will linger with me most is the section focused on Time. Here, Godden depicts a relationship between Life, Time and Death (Life and Time being other personified entities in the novel), forming something analogous to a love triangle. When people say “take your time”, I have always understood that to mean “take it slow” – a suggestion or command to stop and think over whatever it is that you are doing, to avoid rushing in. When Mrs Death said it, I heard “take your time back”, and I felt she was imploring me to use my time for myself.

With Time written as a concrete noun, object or person, I considered how that makes Time transactional. In the last few weeks of 2021, I spent many hours thinking about how I have used, lost and even abused my time. Now, more than ever, I have this raging understanding that I do not want my time to belong to work, that it should not be owned by anyone other than myself, including belonging to malnourishing relationships. I want to feel the benefits of time, to reap the rewards of growing older and reflecting, and to dedicate my time to whatever will help me regard time, not as a chore or something to be endured, but as a measure of possibility. It is something that I can lend, but at the end of the day I want it back. I want to feel like my time belongs to me. Those are the days I feel the happiest, that is when I feel like I am doing life right.

Godden’s metaphors helped me conceptualise this. I realised that I must be the owner of my time because I am never not paying for it in the currency of my life, and there is no one else who can pay that debt for me. It does feel a little grim to think of time and life in relation to economics, but what I can be certain about is that my life is my life, just as my time is my time and my death is my death.

I don’t know if it is the human condition or if it is that we have been conditioned to view life as synonymous with productivity and with output, but that is certainly a common narrative. I have thought about what I would like to leave behind in this world before I die, and that had always been intrinsically tied to what I hoped to produce. Planning for that is not always possible – life is short, life is unexpected and unpredictable, life can end without warning. The intention to leave something behind is often physical – I want to leave something someone can touch, and something someone can think about – but what if it wasn’t?

The last couple of years have made me more aware of mortality than ever. And so, if we cannot plan to leave something behind, who we are, who we were, must be that thing. Can production be simply a bettering of the self? I am still working that out, but I am now inclined to think that what we leave behind must be time well spent.