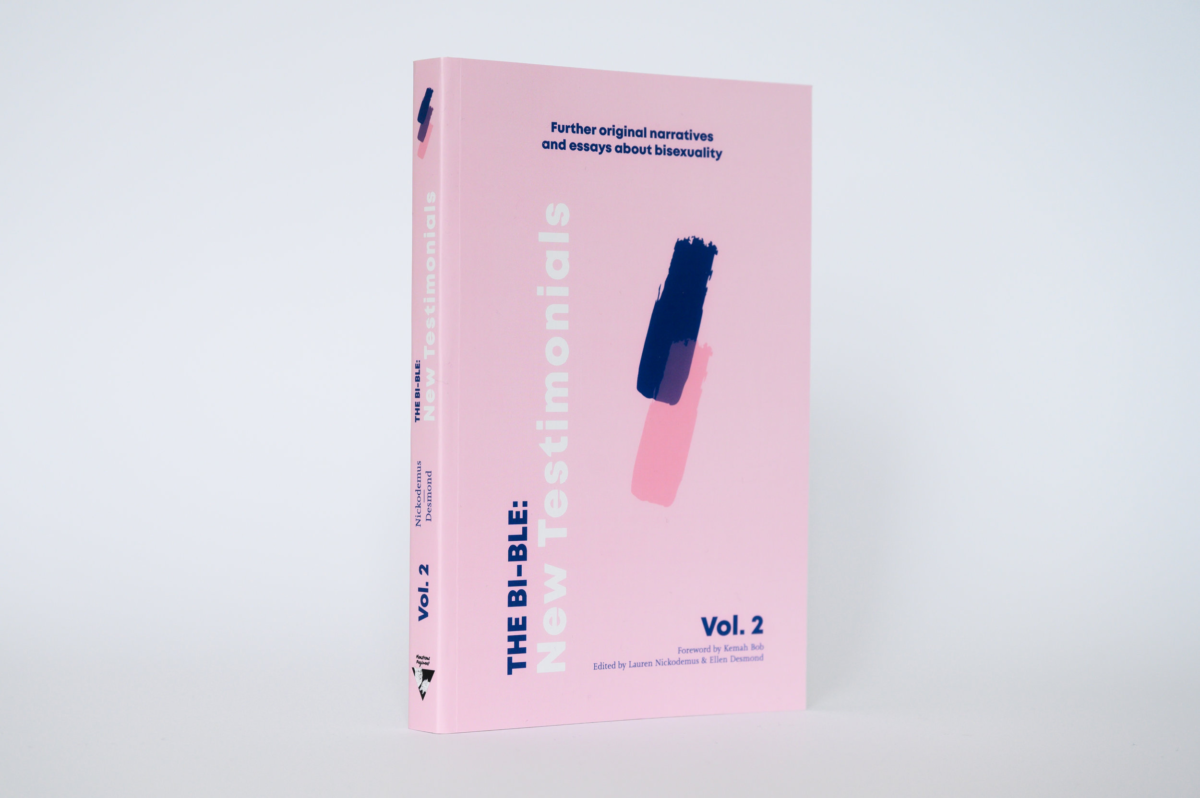 KNOWLEDGE / RESPONSES | As part of the Year of Stories, we are running a series of Responses, commissioning writers to respond to books from the Publishing Scotland membership, engaging with work in different ways. To mark LGBT History Month, Kevin Guyan, Edinburgh-based writer, researcher, and author of Queer Data: Using Gender, Sex and Sexuality Data for Action, writes about The Bi-ble: New Testimonials, Volume 2, edited by Ellen Desmond and Lauren Nickodemus, published by Monstrous Regiment, sitting at the intersection of data and lived experience.

Beyond the binary: queer data and bisexual lives

What happens at the intersection where data meets identity? More generally, what tensions emerge between the representation of lives – in data, education, media, art and culture – and the reality of the lives they claim to represent? These questions were on my mind as I read The Bi-ble: New Testimonials (Volume 2), a collection of 19 essays about the experience of being bisexual.

My own writing focuses on data about LGBTQ communities in the UK, and the decisions made by people in power about how and who to count. For those with the ability to craft the narrative, what stories are brought into view and what stories are pushed further into the shadows? The Bi-ble speaks to the dual sides of visibility by documenting the diversity of bisexual lives and the interplay between identity and institutional bedrocks such as culture, religion, family, education and history. The Bi-ble therefore offers insights that go beyond the grasp of data and its rigid rules: the messiness, nuances, half-steps and grey areas that are formative in making sense of who we are in this world.

In the Foreword, Kemah Bob asks, ‘Where do definitions and labels stop serving to empower us and begin to box us in? When do they begin to limit the ways we think we’re entitled to feel about ourselves and other people?’ In my book Queer Data: Using Gender, Sex and Sexuality Data for Action, I argue that we need to pay attention to the dark side of quantitative data practices. The completion of a diversity monitoring form in your workplace or answering questions about how you identify in a national census are not apolitical or value neutral activities, they produce benefits and harms for particular identity groups. As Bob rightly describes, definitions and labels are liberatory as well as limiting. Numerical data gives the impression that what is counted is static, fixed and unchanging across time and geographies. Those tasked with the collection of data are wrongly understood as archaeologists uncovering artefacts from the belly of the earth, rather than entomologists trying to capture butterflies with broken nets. When we imagine identity characteristics as ‘moving targets’ and value what people say about themselves, rather than trying to fit lives and experiences into predetermined categories, traditional understandings of identity and data are reconfigured.

The challenge of definitions and labels is particularly evident in essays that examine who counts as bisexual. Rebecca Wojturska, in the essay Bidentity, writes, ‘I am a bisexual who has never slept with a woman’, While Vaneet Mehta notes in The Hardest Things I’ve Ever Had to Do, ‘who you have had sex with, or relationships with, does not define your sexuality – it is your thoughts and desires that do’. These reflections highlight the opaqueness of ‘sexual orientation’, which include sexual identity (how a person thinks of their sexuality and the identity terms with which they identify); sexual attraction (the object of a person’s sexual and/or romantic feelings); and sexual behaviour (the sex/gender of a person’s sexual partner(s), if they engage in sexual behaviour).

Of course, the many moving parts of an individual’s ‘sexual orientation’ are not unique to bisexual lives but are equally part of the experiences of those who identify as gay, lesbian and straight/heterosexual. As Alizée Pichot notes in ‘Bisexual Woman Has Sex with Gay Man’: Not Such an Unusual Story, and the title of their essay suggests, ‘Heterosexuality (read: male/female sexual relationships) is not as limited as it appears. In fact (disclaimer, major announcement coming!), heterosexual activity can be très gay, too!’ I welcomed the collection’s exploration of the fuzzy borders between bisexuality and heterosexuality, a topic that some might perceive as taboo but contributed to The Bi-ble’s rounded exploration of the topic.

Most historical data about LGBTQ people in the UK (or those perceived as different in terms of their gender, sex and/or sexuality) relates to the lives of individuals we might now understand as white, cis, gay men. Data was collected as proof of a ‘problem’, where people in power felt something was wrong and needed fixing. As an evidence base to demonstrate criminality, pathological maladjustment or to mark some individuals as different from the ‘normal’ majority, the historical relationship between LGBTQ communities and data practices is harmful. When used primarily to inflict harm upon the people about whom the data related, the relative absence of bisexual people in datasets is an omission that had no easy solution – in other words, nobody would want data collected about them when it is used to paint their community as deviant.

These histories inform our present-day relationship to data. Policymakers and researchers still collect data to demonstrate the existence of a problem, whether it’s evidence of under-achievement in education, poorer health outcomes or experiences of hate crime. Yet, as data makes the journey from collection to presentation, the analysis continues to erase the experiences of bisexual people. For example, when bisexual respondents are aggregated into a wider LGB+ group and data is reported as representative of lesbian and gay respondents only, they are made invisible. This analytical manoeuvre is particularly problematic as bisexual respondents often constitute the largest proportion of those who identify as LGB+. For example, 3.7 per cent of students identified as bisexual in the 2019/20 academic year in UK higher education institutions that returned data to the Higher Education Statistics Agency, whereas just 1.3 per cent of students identified as a gay man and 0.8 per cent identified as a gay woman/lesbian. The erasure of unique insights from bisexual respondents means that even when we have more data about LGB+ lives, when data is published, bisexual people appear to be missing.

The erasure of bisexual lives, as described in The Bi-ble, is not only something done to LGBTQ communities but is also something that occurs among LGBTQ people. Jayna Tavarez, in their essay exploring the realities of being LGBTQ+ on campus, reminds us that when it comes to racism, cissexism, classism and other -isms, ‘The LGBTQ+ community at large has proven time and time again that we are capable (and guilty!) of reproducing the same harmful systems that we claim to combat’. As a response, the editors of The Bi-ble describe how their vision for the two volumes was to produce something that ‘would wedge themselves in on bookshelves and claim some much-deserved visible space for the often erased B in LGBTQ+’.

The removal of bisexual people and identities from narratives across the board makes collections like this all the more significant. Although the balance is improving, the historical canon of LGBTQ writing continues to foreground a narrow depiction of LGBTQ lives. Writing on Black queer femme representation in Erotic Computer, which considers Janelle Monáe’s Black queer femme representation through the lens of Audre Lorde’s writing, Jessica Brough argues ‘it’s hard to be what you can’t see, and it can be hard to be proud of something so rarely celebrated in the mainstream’. In its overarching call for more (and more diverse) bisexual stories and content, The Bi-ble is a necessary tonic.

Kevin Guyan is an Edinburgh-based writer and researcher. He is the author of Queer Data: Using Gender, Sex and Sexuality Data for Action, which explores LGBTQ data in the UK. Queer Data is published by Bloomsbury Academic and is available from most booksellers.