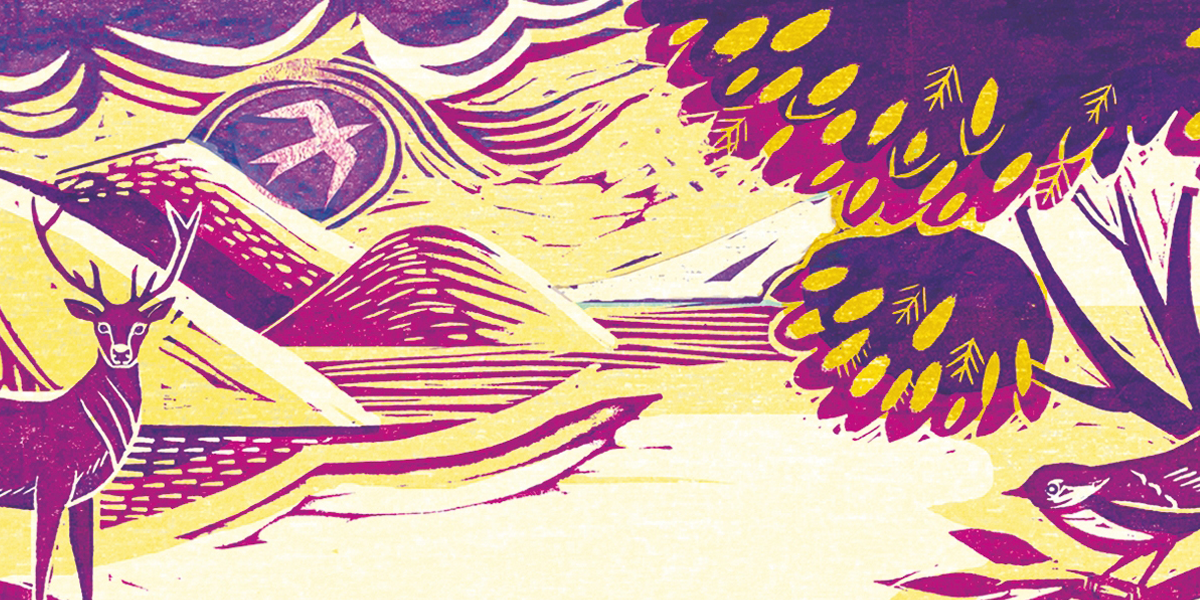 CELEBRATION / RESPONSES | As part of the Year of Scotland’s Stories, we are running a series of Responses, commissioning writers to respond to books from the publishing membership, engaging with work in different ways. For November, and to close the series, Edwin Morgan Poetry Award-winner Titilayo Farukuoye considers The Golden Treasury of Scottish Verse, on the past, present and future of Scottish poetry.

Confession: l have only been claiming the title poet for a season now. I maybe toyed with it, and definitely aspired to it before, but there is something about claiming an official label to one’s name that sometimes requires the force of Edwin Morgan, and a nod from an entire selection committee of well admired writers, to claw back layers upon layers of rejection, imposter syndrome, self-doubt and ‘don’t take yourself so seriously-s’, that encourage us to step into our truths.

And frankly, as a Black (dyslexic) poet of a different birth tongue, excelling in the literary world, in a foreign language, was not, shall we say, anticipated of me.

To think, that I would even put the word poet into my mouth just as I am getting ready to mention so many of our national icons featured in the collection – The Golden Treasury of Scottish Verse: Robert Burns, Peter Mackay, Liz Lochhead, Jackie Kay, Alastair Mackie, Veronica Forrest-Thomson, Vahni Capildeo, Edwin Morgan,… and many more – is truly something.

Looking at The Golden Treasury of Scottish Verse, I had to practice a little bit of self-care, and personal bolstering to remind myself to claim space in this literary landscape of Scottish poetics. (If not for my own sake, then for all of the writers marginalised and rendered invisible in a sector in which queer, BPOC, disabled, working class poets and poets with asylum and migration experience continue to face barriers in. I allowed myself to ask, What is Scottish poetry actually? What is the legacy we inherit as Scottish poets today? And who can claim the craft for themselves?)

Editors Kathleen Jamie, Don Peterson and Peter Mackay invite answers to this in the collection. As I open the book anywhere – appreciative of their instruction – I cannot help myself but romanticise far away times, imagine wild stormy landscapes, green plains, a tempestuous sea,..

This initial image is a visitors’ illusion, a pretty smile Scotland holds up to the sky – a face that, tourists, from across the sea (Atlantic and otherwise) and folk we bump into on the Royal Mile, or, on the off chance of us nipping out early onto Princes Street, see, in this home of ours. It’s a part, at least, of the whole story.

Quickly, the collection transforms and shapes into something that poetry inevitably does. It becomes societal commentary, a history lesson, a reflection and negotiation of the poet’s realities…

In six o’clock news, Tom Leonard writes, ‘yooz doant no thi trooth’, and continues, ‘yirsellz cawz’ ‘yi canny talk right.’ ‘This is the six a clock nyooz. belt up’. Leonard’s poem is gorgeously attributed to the powerplay embodied by dominant language and the culture of the disenfranchisement Scotland experiences from mainstream cultural institutions in the UK. What does it mean for a people if the news is not reported in their tongue? What are the repercussions of intellectualising one regional language over another?

I quickly find my own linguistic limits in the collection, and soon also start thinking about gate keeping, and the power that lies with commanding Scots and Gaelic among other languages. They serve as markers of belonging and justify a ‘claim’ to Scotland and Scottishness. Stretching for my own voice to read out loud and discover meanings my eyes alone don’t grasp, as well as dictionaries and translations online, google searches, and friends, all come to my aid: I become painfully aware of my lack of (Scottishness) exposure to Scots and Gaelic.

I enjoy this challenge though (especially since I have never seriously claimed Scottish identity for myself) and can’t help but wonder if this could be an invitation to all of us to explore our own relationships with Scotland’s languages, and to indulge in them a little bit more. Excitingly, Du Fu (712–770) a prominent Chinese poet of the Tang Dynasty is represented in the collection. I can’t wait to see poems in Urdu, Punjabi, Farsi, Twi, Yoruba, Arabic, Amharic, Polish, Cantonese and more in future collections commemorating Scottish Verse.

There is a lot that is striking in the collection, Ian Crichton Smith’s Clearances almost next to Marion Bernstein’s The Highland Laird’s Song are a good shock to a reader’s system. Bernstein’s lines all for me all for me echo in my head long after the fact of reading the poem, The dirty creatures now complain; Blaming me, Blaming me; leave one shivering, contrasting the pain, devastation and fury the poem Clearances offered insight to.

To me this speaks to the reckoning we still need to do as a nation. How do we negotiate our violent past? Is there a way to make good past evils? How can we move beyond narratives of victimhood and pity and actually learn from the past to change the systems and elevate communities, elevate peoples who have been mistreated and violated for generations?

Scotland’s legacy of colonialism and Empire also finds traces in the book, Jackie Kay’s In my Country answers the question Where are you from? with ‘Here’ I said. ‘Here. These parts’.

Scottish Ghanian visual artist, educator, and poet Maud Sulter’s (1960-2008) work is a crucial voice in Scotland that should be commemorated to acknowledge this history. Among some of her most influential works must be Blackwomen’s Creativity Project, through which Sulter sought to document artistic practices of Black women creatives in the 1980s, which led to the publication Passion: Discourses on Blackwomen’s Creativity.

Sulter writes in Passion (2002) ‘See me, I’m a heroic poet and I don’t care who knows it. And I chose my own kind and in doing so apparently consigned myself to a footnote in history.’

Even today, the beckoning to see violence and injustice addressed, still remains with those who endured and survived it. A way of sharing this responsibility can be to actively seek out and elevate the poets who are doing this work. Future Scottish Verse should ensure that we bring trailblazers like Sulter to the forefront. We urgently need to acknowledge the countless poets who are continuing her inspiring work.

A project this year led by independent arts collective Rhubaba brought together Black Scottish women and non-binary people creatives today, to commemorate Sulter’s work. Alongside documentary film maud., the zine PASSIONS (2022) was dedicated to Maud Sulter and serves to archive and spotlight Black women and non-binary creatives in the Scotland.

Renowned creative non-fiction writer Amanda Thomson describes that public awareness and willingness to engage in the issue is only temporary, in TWA Black WIMMIN, Revisited. (PASSIONS, 2022) she writes, ‘I can’t help but think that there’s a cyclical nature to the world and our position in it, we ebb and flow; we come into view and recede again (though we are always visible to those like us and those who choose to see us, or who seek us out).’

It is impossible not to mention Edinburgh Makar Hannah Lavery’s debut collection Blood Salt Spring.  In her poem The anti-racist working group, Lavery writes, ‘Wonder if they are starting to realise, that they don’t want to give anything away.’ ‘Hush Now (Shitty Brown) and Thirty laughing emojis, brilliantly testify to the reality of race on an everyday basis.’

Award-winning poet Roshni Gallagher is an important new voice in the scene. She describes her poem The Whitby as ‘a sonnet about reckoning with the colonial ties of a place that I love (…) The poem follows the journey first boats that transported indentured labourers from India to Guyana in the 1800s.’

To me poetry is a way to digest and articulate stories and struggles that affect communities. The Golden Treasury of Scottish Verse is a brilliant collection, that through its vastness touches on and verbalises so much of Scottish culture, history, and aspiration.

As a new poet, and as Black poet, I see my work as an opportunity to reconcile, give voice and contemplate issues that pertain our lives today, so that we might better communicate them, and might even come up with solutions, or how wonderful poet Andrés N. Ordorica would put it, to contemplate ‘what it means to be from ni de aquí, ni de allá (neither here, nor there)’.

For the occasion, I would like to offer you my most recent Scottish poem.

Their hair: clouds, flowers
in the sky.
dancing in knots
in braids, in weaves
in twists